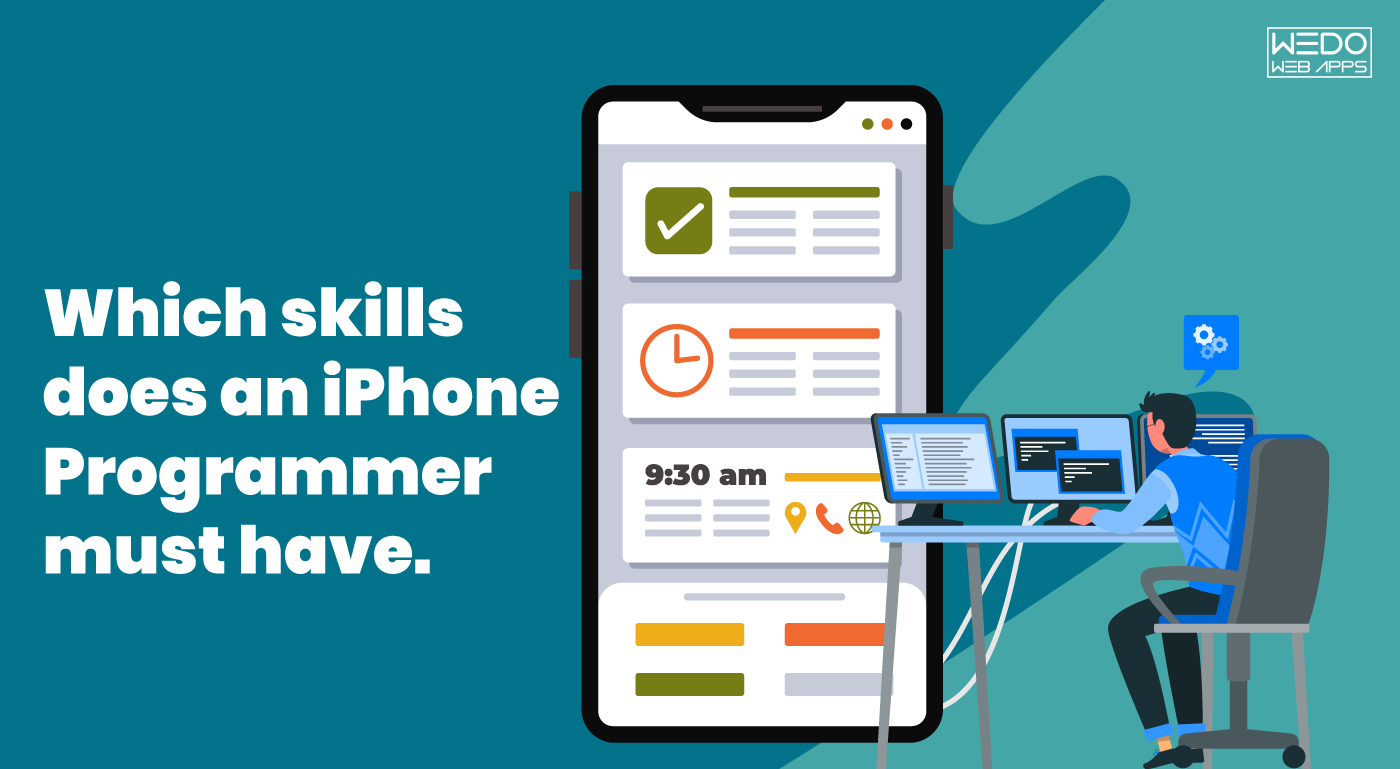 With the growing demand for Apple users, the demand for iPhone Programmer is also increasing with each passing day. Any company that wants to reach a large chunk of the market using Apple products need to avail the services of an iOS Development company. According to the latest statistics released by Apple.

Apple watches, iPads, iPhones, Mac are in the application in day to day life. But iPhones and iPads have been essential products and have observed tremendous growth in the last ten to twenty years. An iOS Development Company works on the programming of the iPhone and iPad. With all such functionalities, becoming an iPhone Programmer is not going to go out of style.

Which skills does an iPhone Programmer must possess in an iOS Development Company?

To become an iPhone Programmer in any iOS Development Company, a developer needs to possess specific skills:

Swift is a Programing language created by Apple, especially for developing its apps. For any future development of iOS, this programming language will be necessary. Therefore, knowing it is essential. The word is not a small and natural language, but the programmer should know the basic syntax, the Control Flow, the standard library, etc. The Compiler is necessary for performance, whereas the word is required for the development with the best results in each of them. Swift allows one with the experimenting of the codes and gets immediate results. It also helps in expressing the most complex ideas and functions in a distinct and precise manner, thus making it easier for understanding.

Xcode is the development environment within which the iPhone apps are created. It is for the installation only on Mac and not on Linux or Windows. When one wants to develop apps for Apple, it is necessary having an Xcode on the Mac. It provides a platform for developing apps for Apple.

It is a User Interface framework for developing software programs to run on iOS for iPhone, iPad, iPod, etc. Cocoa Touch is usually written in an Objective-C language. It offers features such as app extension, multi-tasking, auto layout, and much more. Cocoa touch also provides such features that are not available on Mac. Thus, it becomes unique for devices with iOS Operating Systems.

The ability to think about the objects in three dimensions and then concluding it can be beneficial for the iPhone Programmer. Looking at the app with different sizes or visualizing it in a different method when rotated can help know how the users will perceive and interact with the product. Learning this ability can be useful for developing apps and for building relations between the objects.

For making the app successful, it must interact with the web. It is crucial to understand how the data is sent and received to and from the network. For Apple, JSON that is JavaScript Object Notification is a data-interchange format. It is a syntax essential for storing and exchanging between the browser and the server. As it is light in weight, the data in the JavaScript Object is easily convertible into JSON. Later, it can be sent to the server. On the other hand, the data in JSON format is also easily equivalent to a JavaScript Object. JSON also makes it possible to store JavaScript objects as text.

There are specific guidelines one needs following for an effective outcome of the apps. There are guidelines for How the app should look alike? How should the components be there on the screen? How to store the data? And a lot more. One also needs to understand how the app should interact with the user. In iOS, MVC (Model View Controller) is applicable for representing a structure of an application for presenting data to the user in a defined manner, for the storage of data, updating as per the user interactions. It is also easy to use with programming languages such as Java, C++, and others. Notifications are also necessary as a medium for passing on the information from the sender to multiple receivers. There are other guidelines as well, which are easily usable in app development.

Core Data is the persistent framework provided by Apple for storing data on Apple devices. The persistence feature helps in storing data and retrieving it as well. It saves the users’ data so that the users don’t have to re-enter the data again and again when they open the application. In comparison to other ways of storing data, Core Data works out to be the best in storing complex data. It is not a database, but it is more object-oriented for mapping the objects quickly in the applications.

Grand Central Dispatch is a thread tool pattern, especially for distributing computations across multiple cores. It can distribute any number of threads as per the need and can work efficiently with multi-core processor devices. GCD works with blocks of code that are necessary for executing a specific order or queue in the background. While using GCD, it becomes easy to focus on other tasks as it takes care of the multiple threads.

To be a good iPhone Programmer knowing programming languages such as Xcode, C+, C++, JSON, etc. can be an added advantage as well. But, these are the core things that an iPhone Developer must possess to be successful as an iPhone Programmer in an iOS Development Company.