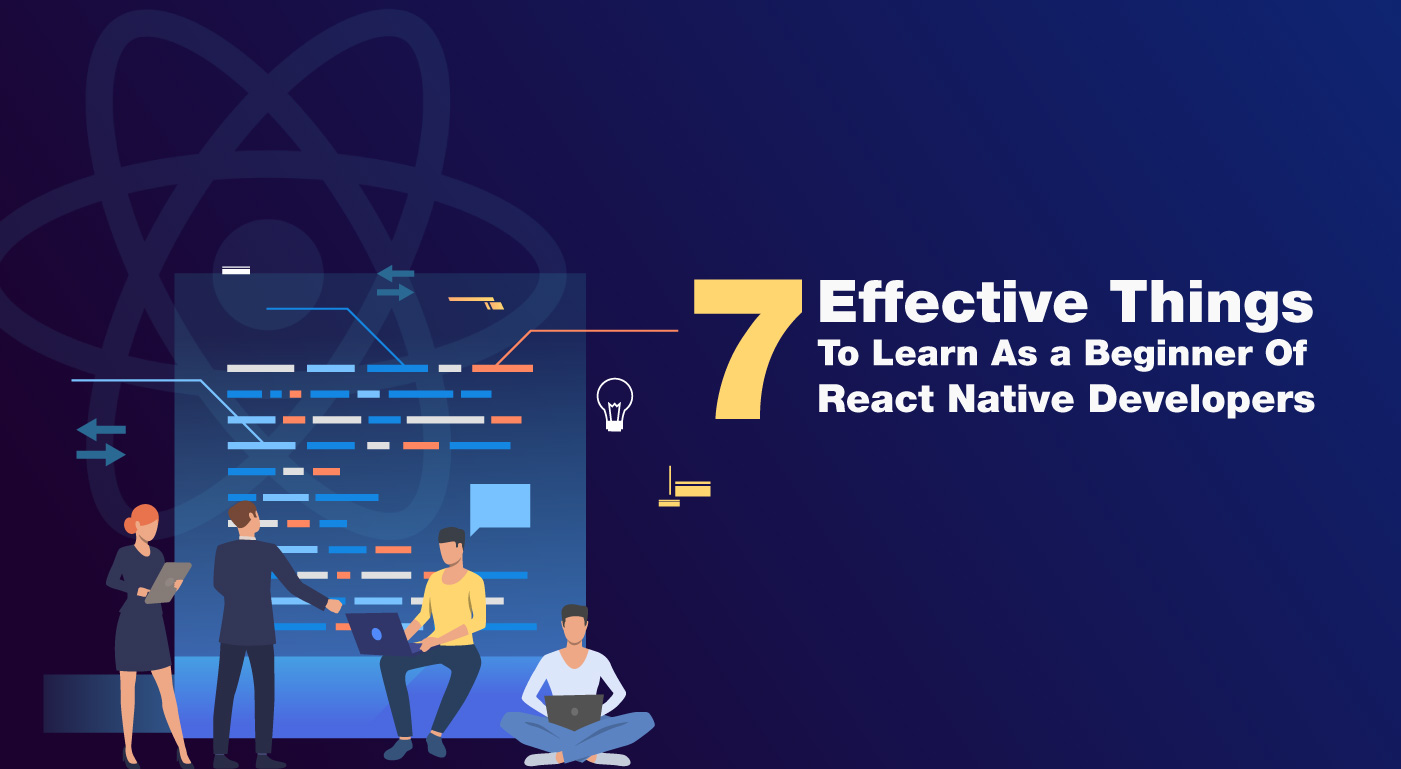 7 Things To Learn As a Beginner Of React Native Developers

There are many platforms are there to learn different languages, besides nowadays, people are smart enough to choose the right platforms to build their applications for their business.

There were several factors and pros are there to learn and build react native applications, but do you know that effectiveness is always mattered when you build your customer’s applications.

Nowadays, we make a nice-looking app in which we can create a journal post. We can have this all underneath authentication.

React working as similar as we create apps by building up a tree of components, and then we can pass data or functions between those components in the form of props so that they can then communicate with each other or shield data to the screen.

The truth behind the React native app

Although some people maybe are a little confused about this, actually is giving you a fully native app for both iOS and Android when you are done this is not a Cordova solution where you’re using what’s called a WebView and just directly outputting a website.

What we do here in react native is use real native components and real native APIs to interact with our code, again this is not just HTML being rendered inside of a web view.

So either way, what’s cool about react native is that because these things are one-to-one if you experienced Swift developer or experienced native developer overall.

You can throw it into Xcode or Android studio and pick it up from there, so you can go from a react native app to a real live native app, and that proves right there.

The cool thing about reacts native is you don’t have to learn any the native stuff, for instance, this application that we’re building an advanced app with material design and thoroughly with the iOS design guidelines.

Now, which are the 7 Effective Things To Learn As a React Native Developers.

Before starting the useful things, I would like to tell you that FB, Instagram, Wix, Skype, they all are using react-native.

Before getting started with react native, you must know javascript, so if you are having a basic knowledge of javascript, then you can quickly grab the concept of React native.

Understanding JavaScript as a beginner does help, but knowing things like flexbox is important since ReactJS is heavily dependent on that as well.

For structuring the vast amount of data, you need to learn to react, which is developed and nowadays used by Facebook to build web applications.

It is nothing but just targeting the platform of development as if you are having the basic knowledge of programming; then this is an easy task for you to understand the syntax, In the MVC architecture, we called view as UI interface, and same here we are going to tell div instead.

The backend will be needed when you want to do the task and store the data of multiple users with dynamic strategy, without this you can only create a basic app which supports only static resource of the client.

React-native use Node js as a backend to build all javascript code, and NPM is used to install and use other packages from an external source.

So knowing both, it is good to push up towards you to react to native developments.

There are some libraries also are there, that third-party developers have created that allows you to add feature over here.

we need node installed at our computer to be able to create react native apps, and if you don’t know anything about node than don’t worry, we only need this for the node package manager

Ones you create your first applications with React JS, you will realize that it is just difficult to manage some resources and components during development.

Redux is nothing but just a State Management Library, which will help you to manage various state during the development of React Js.

There were several navigational libraries you need to use while developing to React to native applications because this is the essential requirement for navigation in mobile applications.

If you want to become a master as a React native developer, at that point, you have to experience some increasingly advanced level learning.

You also need to eye on updating of frameworks and libraries of react native, which is identified by ES.

If you go with five years of information from Google Trends, you can see precisely used to be on top. However, that was a couple of years prior in 2016.

Nowadays, react past it, and it’s been growing ever since until the current day, where react is about twice as popular on the Stack Overflow survey.

We also recommend knowing a little bit about reacting hooks, which will be used correctly for states hot, as we have discussed above.

So this is all about reacting native development and 7 useful things that you have to learn as a beginner to react native developers and we hope you like this article, so share with your techie beginner friends.