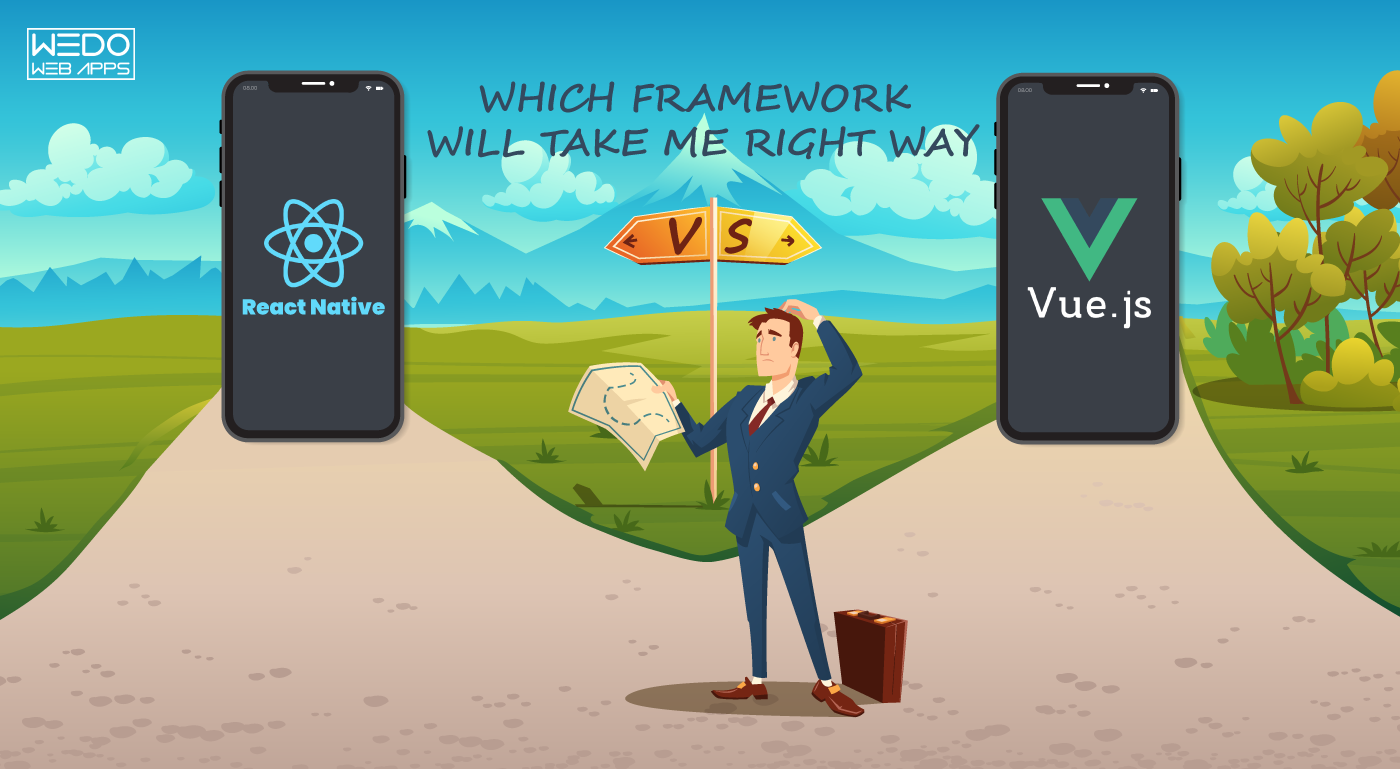 ReactJS Vs. VueJS- Which framework is ruling the market?

As we all know that JavaScript has grown tremendously over the years and has become one of the most prevalent and extensively utilized frameworks for building web applications. With the passage of time, the developers are accessing more of front-end development tools, which usually make the choice process more complex.

However, quite explicitly, the choice needs must be based on the project requirements and the proficiency of the development team. In this article, we’ll be discussing about the top frameworks in the market: ReactJS and Vue.JS that will help you make a better decision for your business:

Why it has become tough to choose between ReactJS and VueJS in 2020?

Now the clash between two most strong opponents; React JS vs. Vue JS has increased to a great extent. However, it has become tricky to make a comparison between the two as both are highly competent and offer wise features, easing the job of developers. To give a common example, both the frameworks are recognized for providing high performances with a simple learning curve.

Additionally, both the frameworks are widely used for making the User interfaces interactive and attractive at the same time.

Before we process, look at the stats of the ReactJS and Vue.Js below:

As we know that ReactJS is an open-source JavaScript framework developed by Facebook. It is basically used for creating User Interfaces. React app development is utilized for developing single-page applications.

You can also utilize it for cross-platform mobile app development. You can reap the benefits of virtual DOM to create a specific data structure for making changes and updating the browser.

As compared to other front-end frameworks, ReactJS is an easy programming language that one can learn, but knowledge of CSS and HTML is a must.

ReactJS is the simplest framework with a defined lifecycle due to its component-based approach. React make use of distinctive syntax known as the JSX that allows it to use both JavaScript as well as HTML.

When you hire React.JS app developer, they reuse the code components of numerous levels while working on the project.

React ensures that the data flow in a single direction, which is downloaded. The major pro of single direction is, smaller data does not affect the large data, enabling developers to make changes seamlessly.

Applications developed on React.JS are very SEO-friendly, allowing you to stay ahead in the competitive market.

Vue.js was launched soon after the React.js in 2014, and since then it has become one of the topmost Progressive JavaScript frameworks across the globe. It is also a well-recognized framework for developing User Interfaces like React. The core library is concentrated on the view layer only, allowing you to build engaging single-page web applications with it.

One of the significant advantages of Vue.js app development is that it has a smaller file size, which includes only about 18KB to 20KB. It enables the users to divide the template-to-virtual-DOM compiler and even the run time.

Vue.js is very simple to understand as it is granted with large scale templates. It also helps to save a lot of developer’s time with its uncomplicated structure, allowing you to spot errors in the blocks quickly.

This is the only sphere where the Vue.js outshines than React JS. It is appreciated for its thorough documentation. If you are a beginner, then you need the basic knowledge of JavaScript and HTML.

Similar to Angular, Vue.JS offers the benefit of two-way communication that helps in improving the HTML blocks handling. Besides, it also encourages the one-way flow as well, allowing developers to work with different components.

The ES6, JSX routing, and bundling provide flexibility to the Vue.js framework. It also helps developers to easily switch on to Vue those who are working on other JS frameworks.

The drawback of Vue.JS:

The so final thing that may strike your mind is which framework is better: ReactJS or Vue JS. Well, it simply depends on your business choice and type. More so, it is quite tough to decide as both the framework very strong opponents with innumerable benefits and fewer disadvantages.

If you’re planning to build your own website, but confused, then get in touch with our experts. We can guide you through the web development process and help you to choose the right web technologies as per your needs. Drop an email with your requirement.