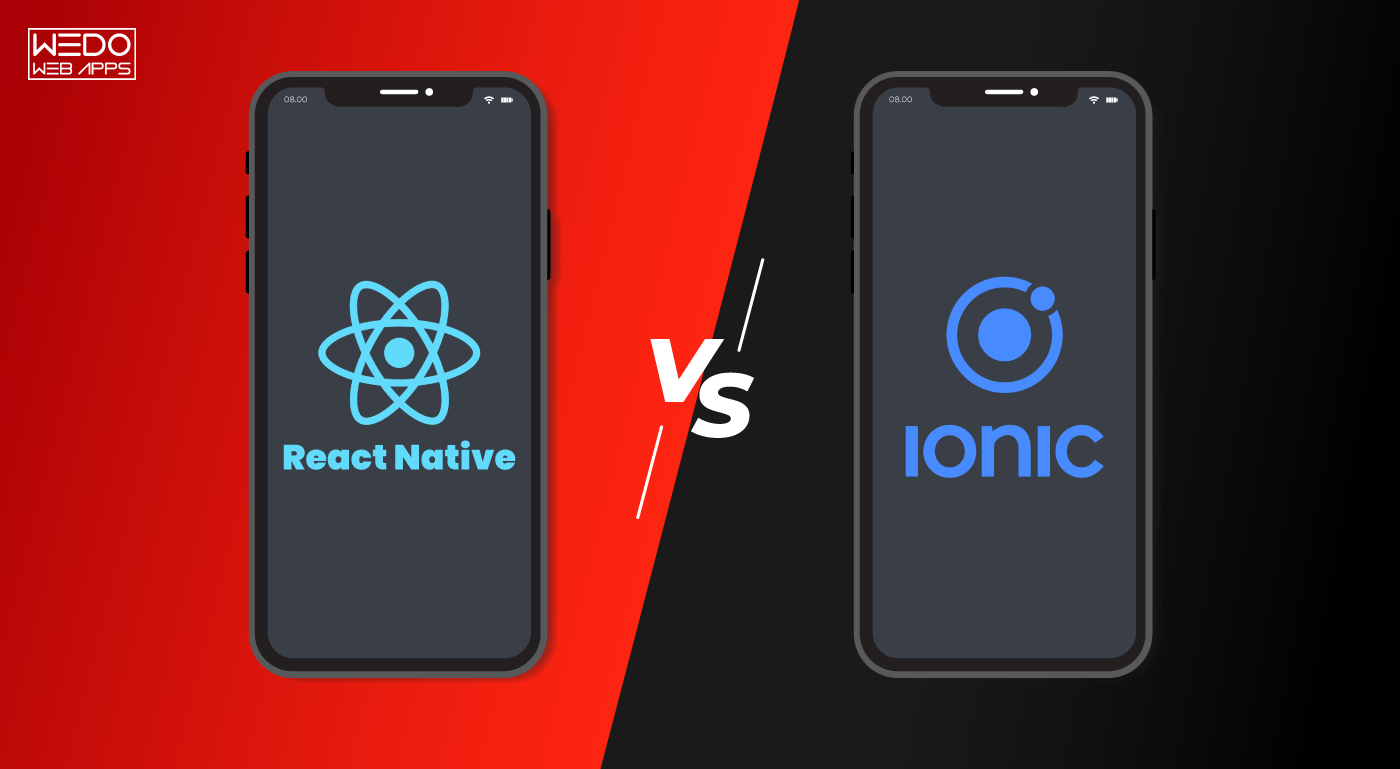 React Native Vs Ionic- Which is a better framework for your app development?

The mobile application market is mounting up, and according to the current statistics, the number of apps has already surpassed 8 million. The race for the mobile app development industry is becoming more challenging as it can boost customer engagement.

Most developers would accept that the adoption of a platform or framework plays an indispensable role in improving customer retention and magnifying its popularity. And there is no insufficiency of choices as far as the number of frameworks is concerned.

If you are thinking to develop a cross-platform app, you’re on the same page as others. With plenty of options such as React Native, Flutter, Ionic, etc., you can choose the best framework that ideally suits your project requirements.

However, in this blog, we would be comparing the two most popular platforms: React Native vs. Ionic. Before beginning the comparison, let’s start with a quick introduction about both React Native and Ionic.

What is React Native?

React Native made its first debut in the year 2015, developed, and widely supported by Facebook. It is a JavaScript framework used for building native mobile and web applications using Java as the programming language.

It completely supports both Android and iOS platforms and applies designs similar to React, giving an interactive mobile user interface. However, don’t forget that React Native does not extend any support to HTML5 or hybrid apps.

Ionic is one of the popular open-source platforms optimized for building exceptional hybrid mobile applications. It was initially introduced in 2013 by Drifty Co. Developers with extensive knowledge of JavaScript, CSS, and HTML5 choose Ionic as its ideal framework.

The framework utilizes Angular and Apache Cordova, which is the primary reason why developers choose this platform. Similar to React Native, it also supports cross-platform app development. The tools like SaaS and CSS, etc., additionally assist in the development process.

What are the significant differences between React Native and Ionic?

It is apparent from the quick introduction of the React Native app development that it is only used for developing web applications and native mobile apps using JavaScript. It allows developers to share the codes across the platform by providing the native components. The User Experience works closely with the other native apps adhering to the models offered by the Operating System.

The React Native also contributes to improved performance as well as seamless animations. However, you would only get the craved result if the bridge components are written for the native elements and offers a default.

On the other hand, Ionic is a strong supporter of the hybrid application development framework. It usually makes use of the web-based technologies for writing and running the application and determines PhoneGap or Cordova for the evaluation of natural features.

Ionic also offers a feature called Ionic Native. But don’t create a misconception that you can create native apps using this feature. It is also recognized as the ngCordova, which helps in utilizing the current PhoneGap and Cordova plugins.

If we discuss the React Native, it is based on the belief ‘Learn once, write anywhere.’ This means that the developers will have to understand the set of rules and make use of the native elements accordingly. React Native highlights precisely on the UI with the presence of the UI components.

For example, you know that Android has a profound customizable toolbar, which is missing in iOS. So, you can use something else in that place. Several components have equivalents, and if it isn’t there, you can easily separate the platform-specific logic.

On the other hand, the theme of the Ionic is ‘Write once, run anywhere.’ It extends a comprehensive Software Development Kit to create hybrid apps efficiently. As we’ve mentioned before, it gets the fuel from web technology and is built on the top of Angular. You can create multi-platform apps using minimum codebase.

When it comes to app performance, nothing can ever beat React Native. The aim is that it is recognized for its more familiar resemblance with native and relatively faster.

However, the developers need to make some changes to the platform-specific element. React is also acknowledged for its stability and is suitable for developing large-scale apps. More so, creating native apps is costly than hybrid apps.

Ionic is quite slower than React Native due to WebView. It primarily uses the mobile-optimized CSS, HTML, and JavaScript components. When you want to add a hybrid factor in your native apps, you can pick Ionic.

The Ionic framework is precisely related to the Angular, which is another common JS framework. It supports the Mode-View-Controller model surely and has got the logic wholly isolated. It employs the HTML view for its views.

React Native also is based on the JS framework, and its code is similar to HTML, known as JSX. The JSX is a secure codebase to work with. However, if you are working solely or if there is a lack of collaboration in a team, you might find it challenging as it wouldn’t be as simple as editing the template files and writing CSS.

You would be fascinated to perceive that while working with React Native, you would encounter various plugins available on the NPM. The plugins are also accessible while using the PhoneGap or Cordova, enabling you to straight away take a lot of plugins from other communities as well.

Again, if you compare the two based on stars they have received on GitHub, React Native is ruling the market. React Native has won 36,000 stars, whereas Ionic has won 25, 000 leads to date.

Both Ionic and React Native is the most desirable choices as far as cross-platform app development is concerned. However, they may be different in the project requirements. It is very tough to pick a distinct winner in between them as they both work excellently.

If you’re looking for a company that can help you choose the right framework for your next app development project, contact us, and we will get back to you within 24 business hours.

Difference between Native Vs Hybrid App Development
ReactJS Vs. VueJS- Which framework is ruling the market?