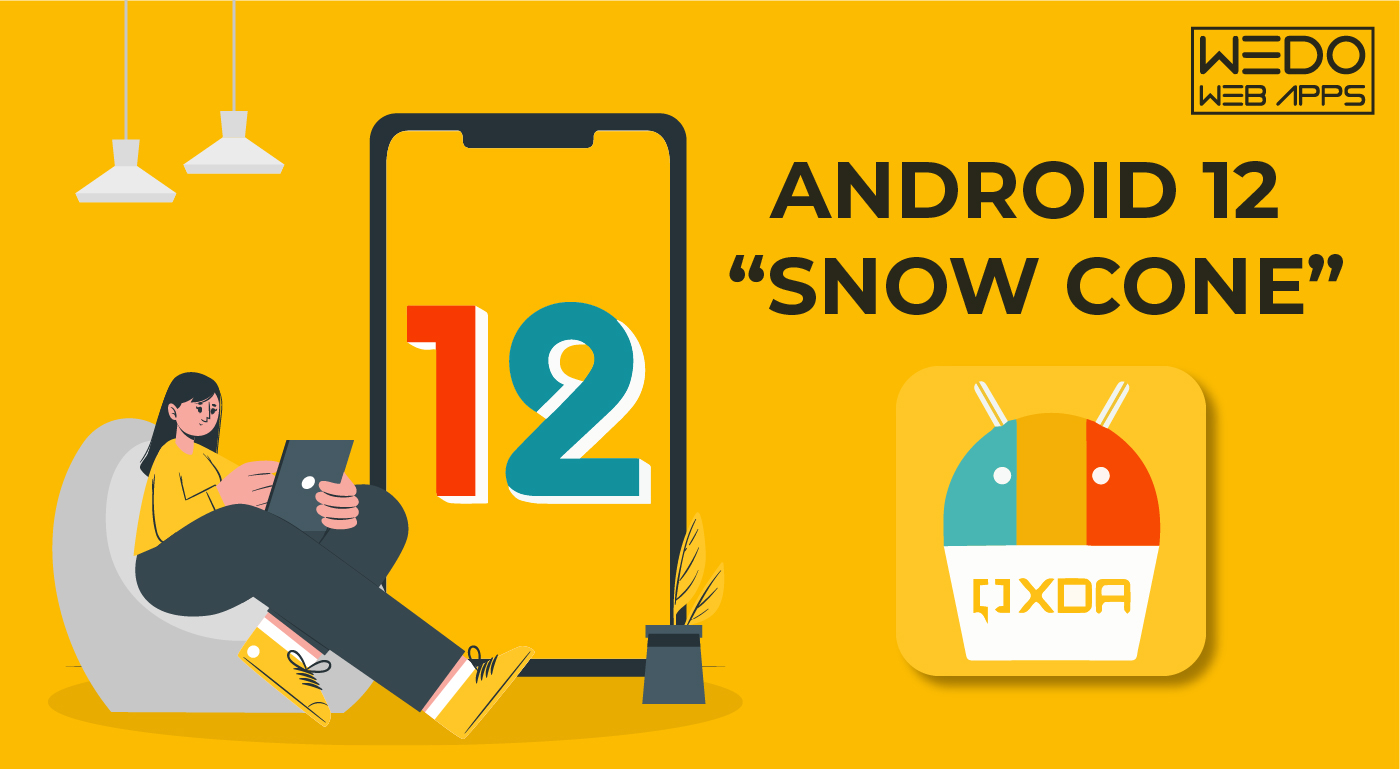 Android 12 “Snow Cone”: All New Features and Changes That You Need to Know About

Android has now become an inseparable part of people’s lives that mostly rely on their smart Android devices to accomplish their daily tasks. Be it professional tasks, games, communication with near ones, etc., and Android has been a full package of utilities for its users.

Not limited to smartphones only, Android has been functioning in various devices such as smart cars, TV sets, tablets, smartwatches, etc. Hence, since its introduction in early 2008, under the name of Android 1.0, Android has increased its popularity immensely among smartphone users, and now available on various smart devices too, and hence it is now the system having the highest number of users across the globe.

More is the number of people engaging with Android, more will be the expectations of the people in terms of ease and smooth functioning of the system, along with the addition of various automation features in the device. Hence, we have seen that each release of the android version has introduced many new features. So, many Android App Development Company have been working hard and have developed high-end applications providing advanced features for Android users. For example, Face detection for unlocking the phone and other applications on Android is now a part of the device in Android 11- R, which was not a part of the earlier versions of Android.

When will Android 12 be available?

The timeline for the release of this version of Android is as follows:

The procedure for the final release of the system will commence from August 2021, after observing the API compatibility, SDKs, libraries, etc., and will then be continued in releasing updates in the future.

In this article, we shall be discussing the latest version of Android, for which the developer preview for testing and providing feedback, has been released recently, Android 12. Let us visit its features, functionalities, etc., and see what new it has to offer. 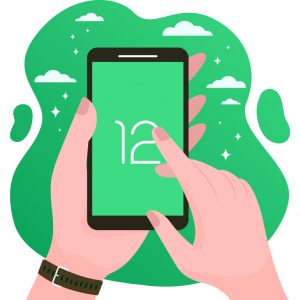 With the release of every new version of Android, the android developer teams have tried to provide more enhanced features in the operating system, such as security, privacy, better performance as compared to earlier versions, and ease in accessing the devices. Some of the new features added to the latest version of the OS can be listed as follows:

– Compatibility for transcoding the media files, i.e., if there are specific formats for images or videos which were not supported earlier, can now be accessed easily on the latest version, in addition to easy migration of the media content into other applications, developed by the android app development company.

– Privacy and security measures to protect your application data.

– Enhancement in the app performance so that the responsiveness of the app increases and the user can use the app with the least delay in response time.

Let us discuss the features of this version of Android in detail.

Security, Privacy, Safety, etc., are the terms that we generally take into the limelight. At the same time, we switch over to a whole new system, and this comes as the main concern for us before adapting to the new system.

In Android 12, the developers have a motto to provide the control and the best possible transparency and the dynamic identifiers that are traceable, that eases the job of an Android App Development Company for building high-end applications and hence keeps the devices and their data safe. More secure components of the apps have been defined for providing the best Android App Development Services to its users.

However, if you update your device to this version, many configurations of the existing apps in your device might change. And hence, it comes under the Android App Development Services providers to test the application before launching it on the store.

The developers of Android have been ensuring the migration of its users to the identifiers that are dynamic and can be reset, and hence enabling the privacy settings. In the version Android 11, the API levels have been set to 30, considering the efforts taken for migrating the Netlink MAC, now in the Android 12 version, regardless of what the target SDK level is, the restrictions are being placed in all the applications.

3. Components can be exported safely:

To prevent the applications from exporting the android frameworks such as activities, services, broadcasts, etc., the latest release of Android has changed the handles for the Android: exported attribute and is now more explicit as compared to older versions. In this update, it has been specified that the components which define one or more than one intent filters need to declare the Android: exported attribute explicitly. In order to avoid the errors at the installation time, it is recommended that you inspect the components and their order in the manifest file, as the changes in the system may introduce errors in installing the IDE.

4. Better handling of the Intents:

The android apps should now explicitly define and declare the mutable flag, i.e., FLAG_MUTABLE or FLAG_IMMUTABLE, for the purpose of handling the PendingIntents element more securely and safely. These flags are to be defined for each of the PendingIntent elements.

Better performance of the Android applications is one of the key points of the system to be a success. In this version of Android, the developers have taken this point into consideration, and they have invested their time and efforts in creating a smooth and polished user experience in the system by developing advanced tools. Let us discuss some of the updates related to this in detail:

1. Transcoding media for compatibility with the system:

Due to the latest update in an android device, HEVC, which are the encoders for hardware devices, the camera application has now become compatible with the HEVC formats and hence captures the images in this format only. This format provides an excellent quality of pictures, even when an image is compressed using the older code encoders. In the latest devices, most of the installed applications accept the media files in this format, but if some applications do not support this format, the newest version in Android has introduced the transcoding of the media files.

For the applications that do not support the HEVC format, the updated platform transcodes the media file to the AVC format, which is acceptable in all Android devices. Although, the process to transcode those media files takes time, as per the properties of the media files and the configurations of the hardware of the device.

This can be done by declaring the formats of the media files that the app does not support and hence choosing the built-in transcoding services on the devices. Developers are recommended to create applications that support the HEVC formats for better video and image qualities.

Android 12 has released the AV1 Image File Format (AVIF) to provide the users with a better experience of compressed video and image files.

AVIF acts as a container of images that are encoded in AV1. The advantage of this format is that it takes the content that is encoded intra-frame, especially in the compression of videos. Hence, the image and video quality improve drastically, without any changes in the size of the file as compared to the images and videos with older formats.

Foreground tasks are generally helpful in managing the tasks that involve user interaction. But, access implementation of these tasks led to adverse effects on the performance of the applications, and sometimes this may lead to the killing of the current activity in the application.

To prevent these issues, the foreground processes will be blocked for the apps that are developed to run on the newer version of the platform.

This is done by the introduction of JobScheduler, which will be helpful for deciding the priority of the processes, network access and hence works with high speed and performance.

Also, a delay of 10 seconds has been introduced in displaying these foreground activities and notifications, with an advantage given to the shorter tasks in completing on time.

Moving the content like images and videos on the application seems to be a tedious task. An API has been introduced in this version, which allows the user to insert the content easily with the help of drag and drop, keyboard, etc.

You can map the OnReceiveContent listener with the UI elements to get a notification whenever the media content is inserted into an application.

5. Haptic effect for the sound vibrations:

The strength and frequency of these vibrations can be obtained from the audio session, creating the best experiences of audio while gaming.

These improvements in gesture navigations have been remarkable while carrying out activities like watching videos, reading e-books, playing games, etc.

These navigations can be done with a single swipe in the new version.

7. Notifications for updates in UI:

Smoother transitions in addition to the animations in the system have been introduced in Android 12. Modern designs, more specific, and improved functionalities of the notifications of these updates have also been implemented.

Generally, when a notification arrives, the user has the practice of moving to the relevant app as soon as possible. This might lead to the less responsive behavior of the application. In android 12, the notification trampolines are blocked, and as a result, the user experience is improved remarkably.

The workload distribution and latency have been taken care of in Android 12 so as to reduce the system variability. Enabling the cache and removing the locking calls are some of the measures taken to improve the latency in the new version. Overall, with this, the performance of the system has almost doubled.

The applications on the Android 12 devices have been provided a better environment after adding the system updates on Google Play.

To enable secure access and environment for applications to run, most of the updates are now introduced through Google Play. You do not need to update the full system to boost your memory, libraries, Kotlin operations, etc.

2. Optimized performance for watches, TV, and other devices:

Developers preview for the devices like tablets, smartwatches, smart TV sets, etc., is also released to check the app compatibility of the Android 12 system. Also, you can test your applications on smart TV using the Google TV interface.

The opt-in changes that may affect the performance of the application are now enabled with toggles. You can help or disable the toggles from the Developer Options tab on your device.

In this article, we came across various features introduced in Android 12, which are yet to be released and are available only for the developer preview. I hope the information mentioned above becomes helpful for all in one or another ways. You can avail of our Android App Development Services and let WEDOWEBAPP LLC A Android App Development Company be your growth partner.

Latest updates by Google for their Android Users: That will transform your phone
Grow your E-Commerce business with best Woocommerce Development Services