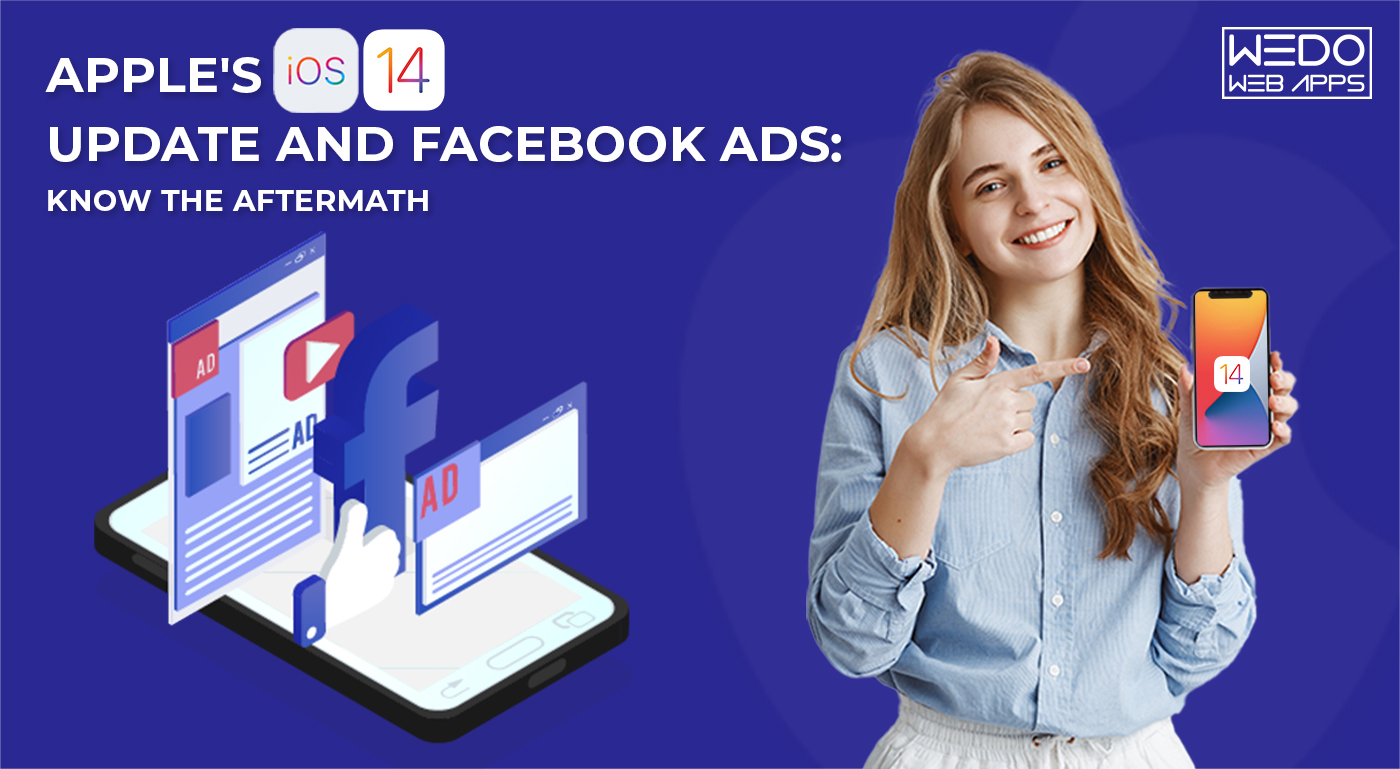 Finally, it’s official, and it’s happening. Apple has announced its new Update, iOS 14, and it is going to affect how we use Facebook ads. There’s been a lot of talk in the digital world about the iOS new update and its relation to Facebook advertising. Apple’s three new app policies are going to take full effect soon.

Well, the digital biosphere is so dynamic, and it keeps evolving. Many technology changes have occurred in the past and will most likely happen again in the future. Changes are a part of the rapidly evolving world.

There are a lot of resources summarizing the situation with iOS 14, particularly from Facebook. In short, Apple has announced an update that will affect how Facebook can receive and process conversion events from the tools like Facebook Pixels. Any organization that advertises mobile applications and those who target, optimize, and report on transformation events will be affected. Apple wants all App Store apps to show a prompt to its users on iOS devices, asking the users for permission for the particular app to track them outside the platform.

Coming back to the current Update announced by Apple, Apple has announced that most likely from March 2021, it will provide the users with an opt-in prompt on each app. This prompt will allow the users to choose whether they agree to the third-party sites like Facebook to track their user data. This article will discuss how Apple’s new policies and updates will affect the Facebook advertisers.

The new Apple IOS 14 update will make a consequential impact on all the applications in the market. Most likely, Facebook, the biggest and the most important among all. Since most businesses use Facebook Ads as one of the primary lead generation techniques for them and their clients, we reached out to Facebook and Facebook experts to collect all the information available in one place.

Here is a statistic: 80.5% of Facebook users access the app on Android. On the other hand, 14.3% use Facebook on iOS. There will still be significant changes that will impact the business owners, advertisers, and marketing agencies. It will affect the marketers advertising an iOS mobile app, especially for installs and in-app conversions. The amount of the problems this could cause is unclear, but it certainly appears that iOS advertisers should expect less data, incomplete data, and less flexibility.

That’s where Aggregated Event Measurement comes into action. Data will be restricted, collected, and delayed in this case as well. Possibly the most significant direct impact will be related to attribution. The delayed, limited, and incomplete data forces Facebook to update its rules on attribution. A conversion will be reported based on a seven-day click.

Moreover, when Aggregated Event Measurement is used for a user who opts out, Facebook will only receive the highest-ranked event from Apple for a user’s visit. For example, if a user performs events like ViewContent, or Purchase events during a visit, only the Purchase event would pass on.

Here are some of the changes Facebook advertisers can expect

1. Changes in the app advertising

In May 2018, Apple launched a concept called ‘SKAdNetwork’ API. The main reason behind this concept was the privacy of the users who installed mobile apps. In 2021, the ‘SKAdNetwork’ API is not just a concept; it’s the reality and will affect how people use Facebook Ads.

Additionally, this API will be used by Facebook for app advertising on all iOS Devices. It will either restrict, aggregate, or set back all the app events. For instance, regarding campaign management, the event date will be confined to a maximum of nine campaigns and five advertisement sets per campaign for each Facebook Ads account.

Besides, lift measurement will be inaccessible for iOS Mobile Apps Install and App Events campaigns. Also, to wrap things up, announcing events will be deferred for as long as three days after an application is installed.

The new default attribution window will make measurement somewhat convoluted as it will add to under-reporting about organic and paid channels. You ought to likewise anticipate an increment in dark social traffic. If you can’t remember what ‘dark social’ is, individuals secretly share content via online media, making it harder to follow. Dark traffic has consistently been there. However, the new iOS update may add to its addition.

Regarding ad reporting information, there will be a three-day delay on the information shown for the information that comes from iOS 14.5 clients. It is a result of Apple’s PCM (Private Click Measurement) protocol.PCM can limit and defer information access. Restricted information could make running advertisements somewhat tricky for advertisers. For instance, customers will only see a couple of reported conversions, and tragically, the conversion event breakdowns would not exist.

The SKAdNetwork API isn’t the lone new launch of Apple that will influence advertisers. Apple has additionally made the PCM (Private Click Measurement) convention for web attribution. This convention will efficiently add to limiting data to which the organizations and stages can get.

We should comprehend PCM with a model.

Assume an iOS 14 client is served an advertisement on Instagram and is taken to an internet browser to finish a buy. Presently, on account of PCM, this event would be lost and not appropriately ascribed. Indeed, Facebook will deliver the Aggregated Event Management tool to counter this issue. This device will help in the attribution of deals if an event like the one referred above happens.

With iOS 14.5 updates, there is an eight-pixel event limit per domain for optimization. It implies that an advertiser will have the option to utilize a limit of eight conversion events for every space for optimization. This way, in case you’re an advertiser, you should focus on the eight events that are the most imperative to you.

One thing to note here is that the eight-event cap is just covering the number of events you can optimize. However, you may, in any case, follow more events for reporting and public creation. So, the new iOS update may ruin optimization, mainly if there are insufficient data points. It is not excellent information for small-scale advertisers who don’t have numerous data points, just like big advertisers.

This part is short and basic, yet vital. The Facebook Business Manager interface will have an adjustment in the plan. It should be done because Facebook can’t have a different interface for Android and iOS.

It’s not going to be advanced science, and advertisers will become acclimated to the new changes in the Facebook Business Manager interface in a brief span. For example, things may move from Ads Manager settings to campaign level, or perhaps, from Ads Manager to Event Manager.

Now, Apple has already introduced its Update. All the advertisers will have to deal with the Update and come through. However, the question is How to Prepare your Facebook ads for the new Apple iOS 14 update.

To be prepared for this new Update, get your domains verified and start understanding how many purchases/leads and other events are from iOS devices. Also, choose which conversion events you need to use, focus your advertising efforts on getting email addresses, and send your clients messages about these steps and work with them on their domain verification. By following these simple steps accurately, you will be able to get yourself highly prepared for the all-new iOS 14 updates.

New problems bring new beginnings. It’s just the way it is. These updates might be frightening, but in reality, they are exciting. Because the entire marketing industry is affected, and in a short time, we’ll see a new set of improvements, experiments, strategies, and Marketing tools that could complement these updates. And most importantly, if you follow the news close enough, you can be the one to benefit the most.

We can expect many improvements from the Facebook team in the coming months. Accept the situation, and keep your eyes open for the upcoming tools and strategies for the betterment.

1.  What eight events should I be tracking?

The eight events one should track might vary from one business to another business depending on the goals of their website. For instance, an e-commerce business might track its popular events such as purchases, add-to-carts, product views, newsletter subscriptions. And a business focusing on lead generation can follow the events like form submission, landing page views, calls, ebook downloads, etc.

The Apple iOS 14 update directly affects how the apps collect and utilize data. Apple requires that apps ask for the user’s permission to track the data across third-party apps and websites. It’s expected that most people won’t go for tracking. Therefore, this will affect advertising on online platforms like Facebook.
To follow up with Apple’s policy, Facebook recently rolled out updates that advertisers should be made aware of the following: The Facebook pixel is assigned to a website domain, Brands and Organizations are limited to 8 conversion events, Changes to the attribution window, Limitations on Tracking and targeting.

3. How to approach Remarketing with the Recent Limitations?

If you want to remarket with the recent iOS Limitations, take some time to identify your target audience by studying through your analytical data in Google Analytics and see what amount of users browse your website through an Apple mobile device. It will be an estimated number of users you will not be able to reach with your remarketing ads.
You’ll also need to check your frequency in your remarketing campaign on Facebook. As your target audience gets smaller, you need to avoid over-serving your ads to the same group of people. You’ll also have to control your advertising expenditure and avoid creative exhaustion.

Top SDKs, Frameworks, and Libraries for Android App Development in 2021
React Native Native vs. Flutter – Let’s See Which One is the Winner