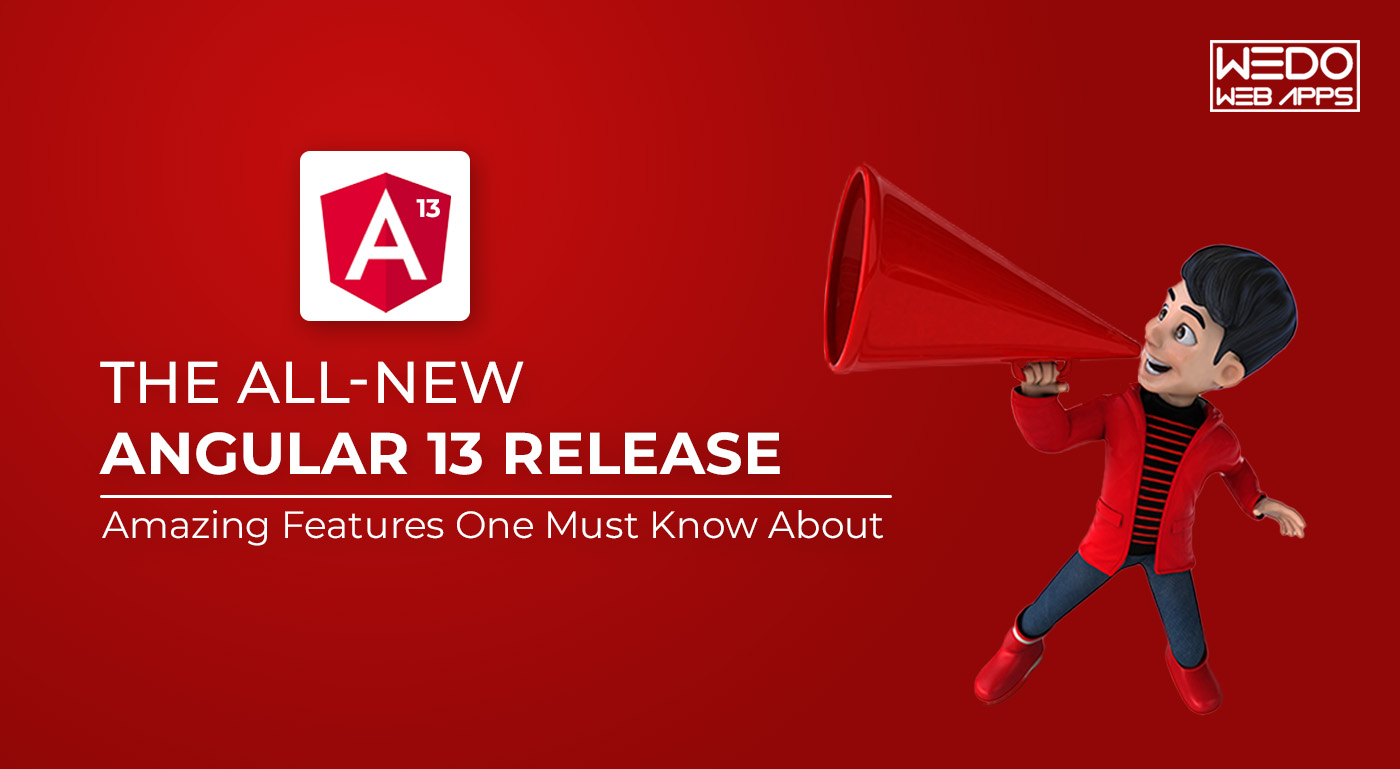 On November 3, 2021, over five months after the last upgrade, Angular published v13, which is now available as a production release. Developers must run ng update in their project to get Angular 13.

Angular js web development experts, often known as Angularites, were eagerly anticipating this Angular release, which, among other things, removes the view engine entirely and gives a cleaner approach to design components.

The latest version of Google’s famous TypeScript-based web framework, Angular 13, is now available as a production release, promising to be “100% Ivy.”

Ivy is Angular’s next-generation compilation and rendering engine, which has been supported in recent releases while the predecessor View Engine is still supported. In Angular 13, support for the Ivy library is being finalised, while support for View Engine is being phased out. In Angular 13, performance improvements are highlighted in areas like Adobe Fonts and the ESBuild JavaScript bundler, with ESBuild now supporting CSS source maps, allowing for optimised global CSS.

Apart from these Angular 13 has been launched with many fascinating features that you will be stunned after knowing. Read further to know more about the Angular 13 updates and features.

There is a lot to know about the new Angular 13 update that has been launched with so many new and exciting features. You will really be fascinated to know more about these feature updates.

The command-line interface (CLI) is unquestionably the most crucial aspect of Angular’s success. By automating critical operations like initialization and configuration, Angular’s CLI helps to streamline the entire development process with simple commands.

Angular also has the capability of smooth updates, which is important for developing massive applications. The Angular CLI makes it easier for developers to make room for new components by assisting them in locating the appropriate folder for the update and the appropriate module to import the component into. Angular also runs a quick unit test to confirm that the component renders correctly. As a result, before starting the development process, make sure you have the correct angular app development team structure in place.

In Angular Material, the latest version of Angular has added an Accessibility (A11y) feature. The team has analysed and validated all MDCs (Material Design Components) for better accessibility. For example, radio buttons and checkboxes now have larger touch sizes, while other elements now have higher contrast modes.

3. Ivy is 100% complete, and View Engine is no longer supported.

Angular 13 now does not support the View Engine. The new version is entirely made up of Ivy. Because there is no View Engine-specific metadata or outdated output formats in Angular 13, it reduces codebase complexity and maintenance expenses.

To ensure that this transition goes well, the framework has converted all internal tools to Ivy ahead of time. Ivy assembles each component separately, which speeds up the development process.

The use of ngcc (Angular compatibility compiler) is no longer required for libraries developed with the current APF version. Because metadata and summary files are no longer required, the development team should expect faster compilation.

The Angular Package Format (APF) defines how Angular Framework packages are formatted and structured. It’s a fantastic way to package all third-party libraries in the web development ecosystem.

Angular 13 introduces a new version of the APF, which includes the following notable changes:

– UMD bundles are no longer manufactured.

– It combines package exports with Node.js’s sub-path pattern capability to provide many potential outputs at each entry point.

The Angular framework has deprecated support for IE11 in order to take advantage of native web APIs and contemporary browser features such as CSS variables and web animations. Because there are no IE-specific polyfills and no requirement for distinctive loading, it delivers a faster load and reduced bundle size for apps, as well as a better user experience.

For certain organisations or authorities that still use Internet Explorer 11 and haven’t upgraded to Microsoft Edge or other current browsers, this is a significant change.

FormControlStatus is a new type of form introduced in Angular v13. It collects all form control status strings in one place:

For example, instead of string, the type of AbstractControl.status is now FormControlStatus.

Inline support for Adobe typefaces is another highlight of Angular 13’s release. These fonts can improve the functioning of an app by speeding up the FCP (First Contentful Paint). By default, this update is now available to everyone. You only need to run the ng update command.

8. APIs that are ergonomically designed

Angular v13 uses ergonomic code-splitting APIs and granular code disruption at the component level to reduce load time. Performance has also been improved with the new edition of ESBuild.

ESBuild is a JavaScript bundler that is extremely fast. It now collaborates with terser to optimise global scripts. It also supports CSS source maps, which enable global CSS optimization. This JS bundler also supports Vue, Svelte, and Elm, among other framework languages.

The Angular team has made several notable modifications to TestBed, which now appropriately tear down test environments and modules at the end of each test. Developers may expect more optimised, less interdependent, less memory-intensive, and faster tests now that the DOM is cleaned after tests.

TypeScript 4.4 is now supported in Angular v13. It means we can now take advantage of a variety of amazing language features. Furthermore, they no longer support TypeScript 4.2 and 4.3. TypeScript 4.4 has a breaking change that is beneficial for Angular apps: it no longer implements setters and getters to get a comparable type.

$localise is a well-defined API. It is used by developers to create an efficient method for in-built internationalisation (i18n) and tag messages in code and templates for translation.

Inline support for Adobe typefaces is another highlight of Angular 13’s release. These fonts can improve the functioning of an app by speeding up the FCP (First Contentful Paint). By default, this update is now available to everyone. You only need to run the ng update command.

The dependency injection feature of Angular increases the readability of the developer’s code, making maintenance and iterations easier. This is especially advantageous for large-scale enterprise systems, as it reduces testing time and development costs dramatically.

The most important feature of Angular’s dependency injection is that it provides for the explicit structure of different injectors, allowing the developer to update or replace any of them without having to reconfigure the rest of the app’s components.

Components are the building pieces of an application in Angular web development. Angular’s cohesive components resemble a tree and are made up of just relevant pieces with linked functions. All Angular apps benefit from a clean and seamless API provided by these components, which are properly encapsulated. The reusability and maintainability of Angular architecture are two of its strongest features.

Reusability – Angular app components are self-contained and reusable. This means that once a component with a given feature is developed, it can be reused in any portion of the code where the functionality is required. Angular’s component-based reusable architecture helps developers save time while maintaining consistency across the entire application.

Maintainability – Another key benefit of Angular is the framework’s loosely linked components. In this case, app components may be readily changed with the needed implementations, making app maintenance a breeze. You may make the process even easier by partnering with a top-rated Angular JS development firm.

The angular team ensures that a new version upgrade is issued every six months. Angular 12 was launched on May 12th. Angular v13 is officially available, and it comes with a flood of new features and improvements. Try out Angular 13 with the power of IVY. It’s time to upgrade from Angular 12 to Angular 13 if you’re using an older version for fantastic angular app development that comply with new web and app developing standards.

You can also Hire angular js experts to quickly upgrade an existing project to the most recent version. WeDoWebApps is the leading AngularJS Development Company across the globe with a 99% client satisfaction rate. Get in touch with us if you are looking for the best AngularJS App or Web Development. Milan is a co-founder of WEDOWEBAPPS LLC. He has been at the forefront of the business, expanding it globally with the latest technologies. He also has a passion for sharing his expertise with clients and other enthusiasts. He usually writes about technology, Leadership, and Entrepreneurship.