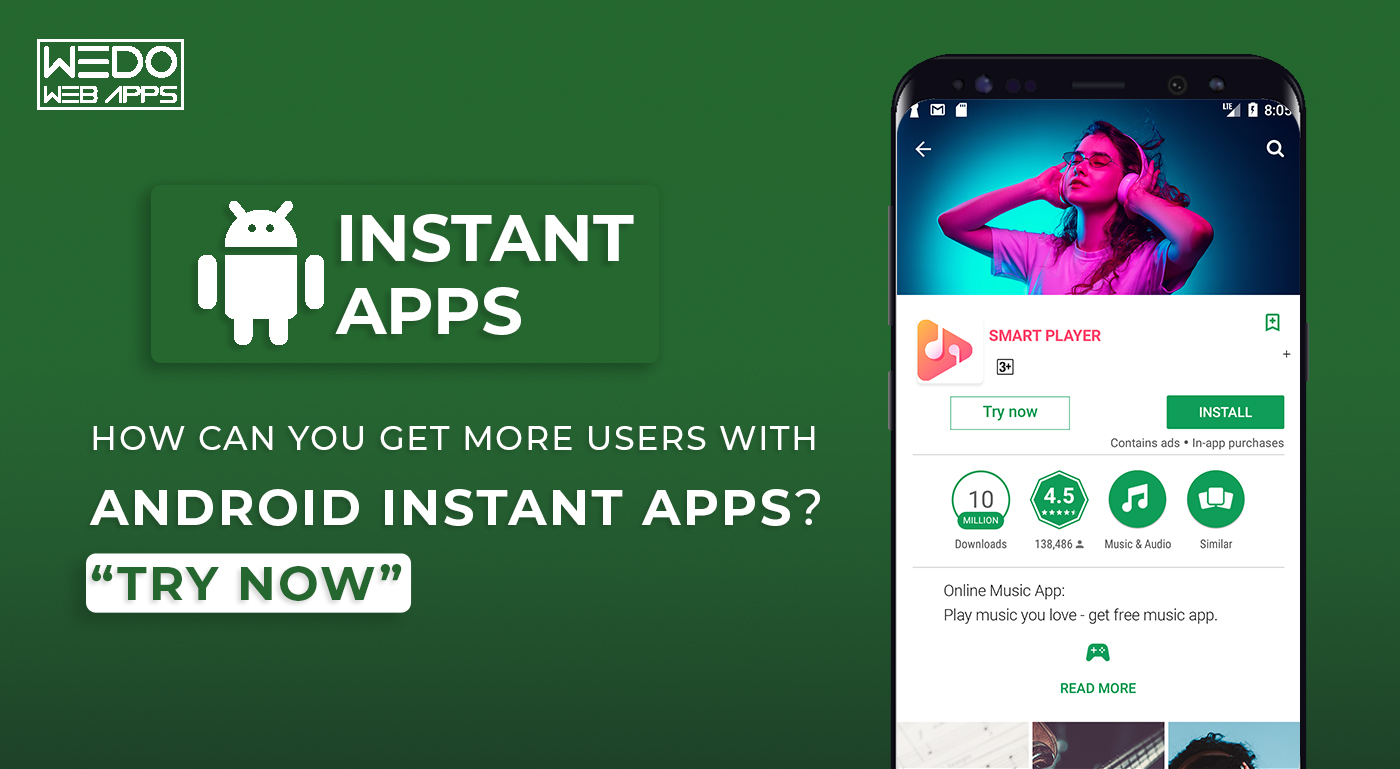 How Can You Get More Users With Android Instant Apps? - “Try Now”

In a world where everyone needs to get things done instantly, how can Android lag within a very short period? Well, guess what, it doesn’t! Have you heard of the term Android Instant Apps before? Various Android app developer companies are after the quick procedure of what is known as the Android Instant Apps. These instant apps are sure-shot your best friend.

Think to yourself- wouldn’t it be amazing if you could use an app without having to download it? Without putting any additional load on your device’s memory, you can get an impressive experience of the app just like that.  Google Play services for instant apps make this possible for you. 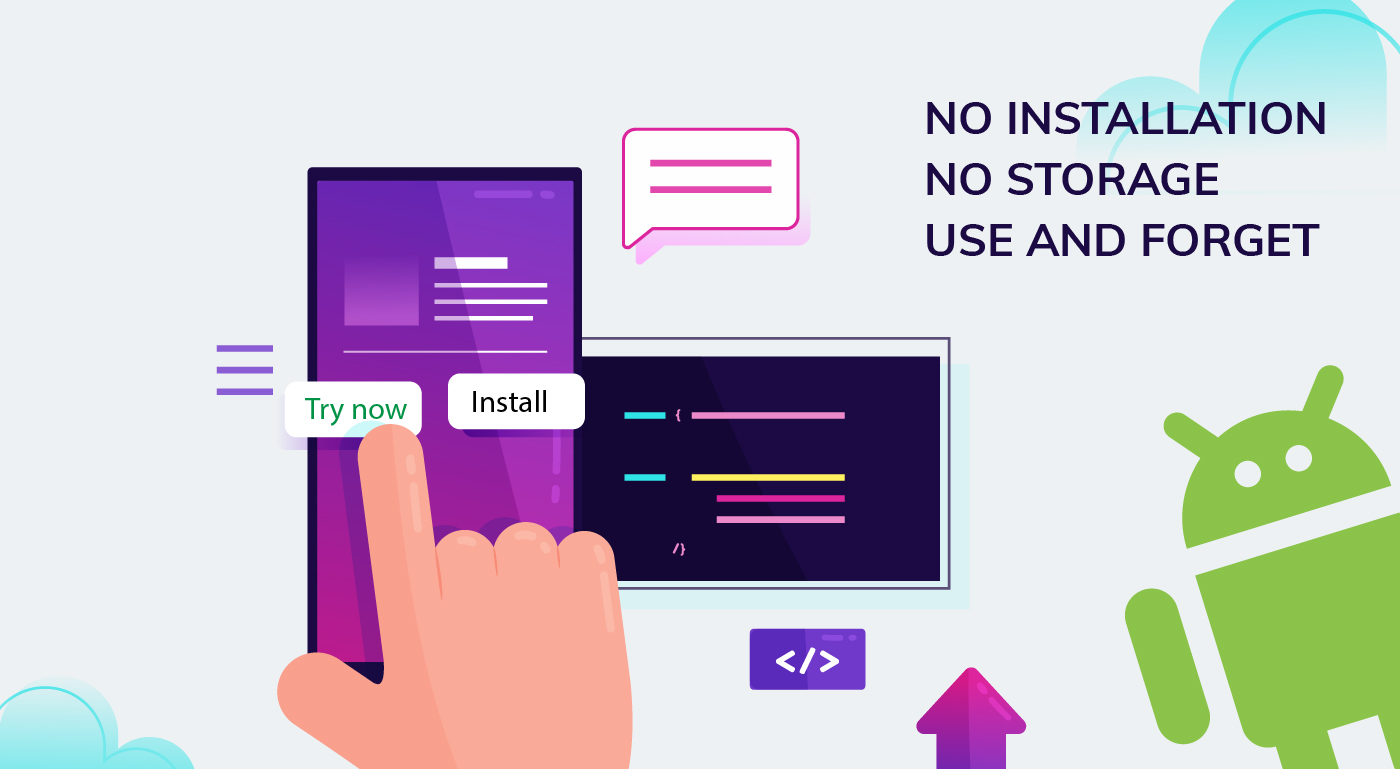 From the android app developer company’s point of view, it is a great way to get their customers engaged and attracted to their app because of the main feature- optional download. This feature helps you keep your phone light. Your app module behaves as a standalone app that can be easily accessed through a URL. You can access the app from anywhere, anytime, via the URL searching element. Let us now see the working of an instant app.

How can you get more users with Android Instant Apps? 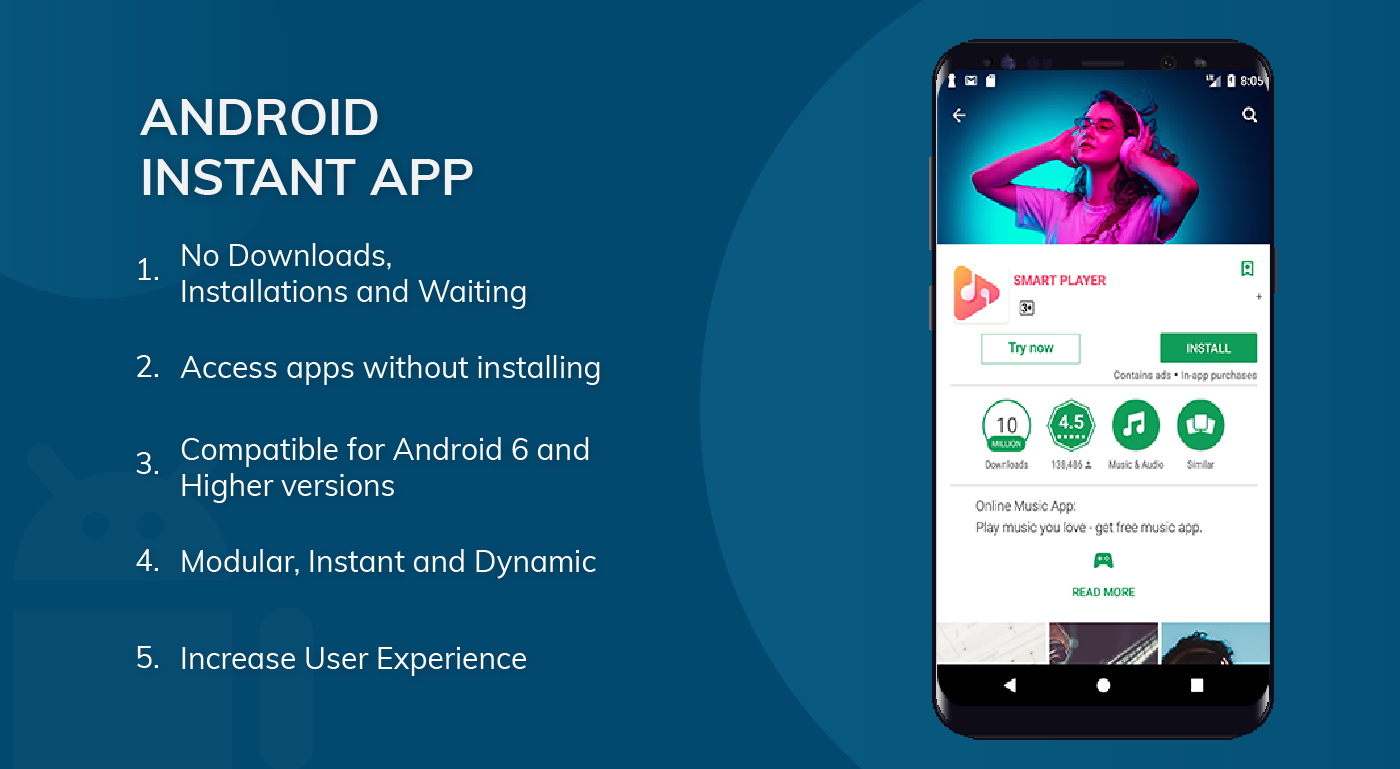 At Google I/O 2016, people saw the first face of a great new Android feature called Instant Apps. These instant Android applications are proposed to bridge the gap between web applications and native applications. The basic idea of ​​Android Instant Apps is to break down native apps into smaller parts, making it easier for an app to run instantly without having to go to the Google Play store. In addition, instant Apps allow the user to access the cloud-based version of the app on an Android phone without installing it from the Play Store.

An instant operates through a URL. This URL, when tapped, initiates a command for Google Play which further initiates the feature APK corresponding to the request, ultimately leading to the Android device starting the instant app. To get a detailed knowledge of how this happens, you could reach out to an Android App Development Company. If in case the Google Play instant app services fail at this juncture, the android system takes the job into its hands and maintains the request of the URL. 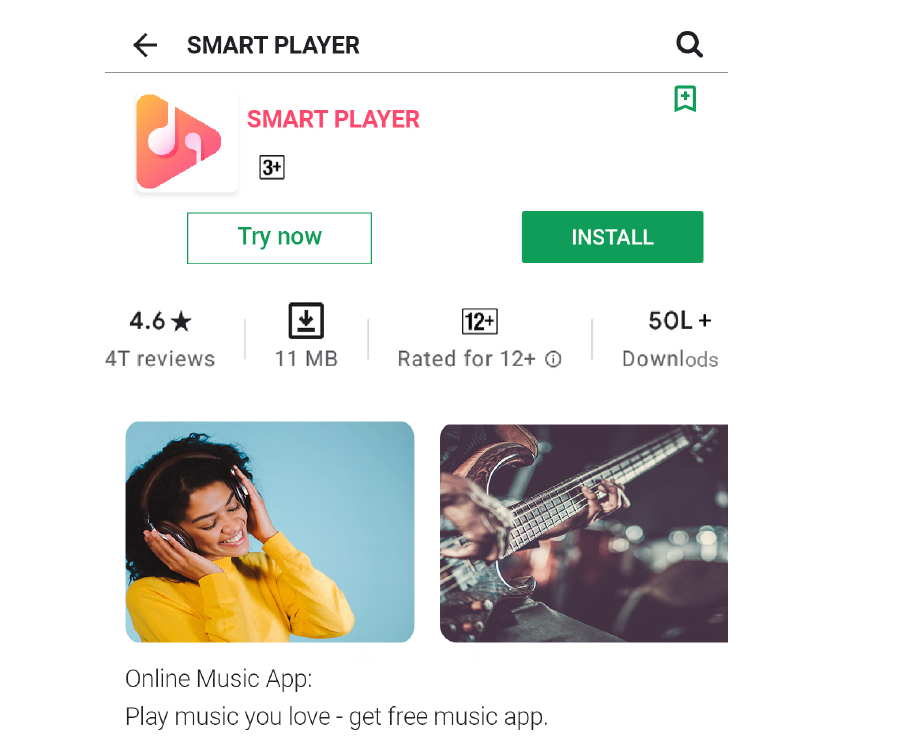 The URL designated to each app is unique, which eases the work of the entire system. In addition, finding a matching instant app becomes easy this way.

The instant applications have a distinct program structure. Instant apps can either be created during the Android 3.0 that contains an instant app module, and this module can be put into the project. The project structure consists of a base configuration and another feature, APK. If there is a need to expand only one feature as an app, the base structure will serve the purpose. In the other case scenario, if you wish to add an APK that supports multiple features in the app, other feature modules have to be added to generate the APK. Base element APK generally contains shared assets for numerous highlights.

Why should you elevate up to Instant Apps?

Does the question now lie that why are instant apps so much in vogue these days? What is it that is creating the buzz around instant apps? Here are a few things that you should consider before deciding on investing to hire android developers or develop an android instant app on your own. There are certain privileges hidden in the procedure of developing an android instant app.

Taking The Real World Into Consideration

While there is the evolution of several things taking place, our technology has to evolve too. Today’s world is fast, and people are always in a hurry. At this point, if one has to go through the whole app downloading procedure just to order, for instance, food or medicines or a parking app for a city where he doesn’t belong, just for some time, it undoubtedly infuriates the person. Certain android app developer companies do not consider that their users are busy and do not have time to install an app every time and anytime.

In such cases, instant apps are your best friends. For both the android app developers and the users, instant apps are highly beneficial. The primary concern is the size. Android instant app size limit is a substantially small amount. You do not even retire to fit it into your device. You can use it without downloading.

Which apps will benefit the most from this?

Android Instant Apps, without any doubt, is a revolutionary idea to make available to users at any time without the need to install apps. If you want to know more about Android Instant Apps, you can get in touch with our Android app developer company, Google’s preferred Android App Development partner. Contact us here or send an email to [email protected]