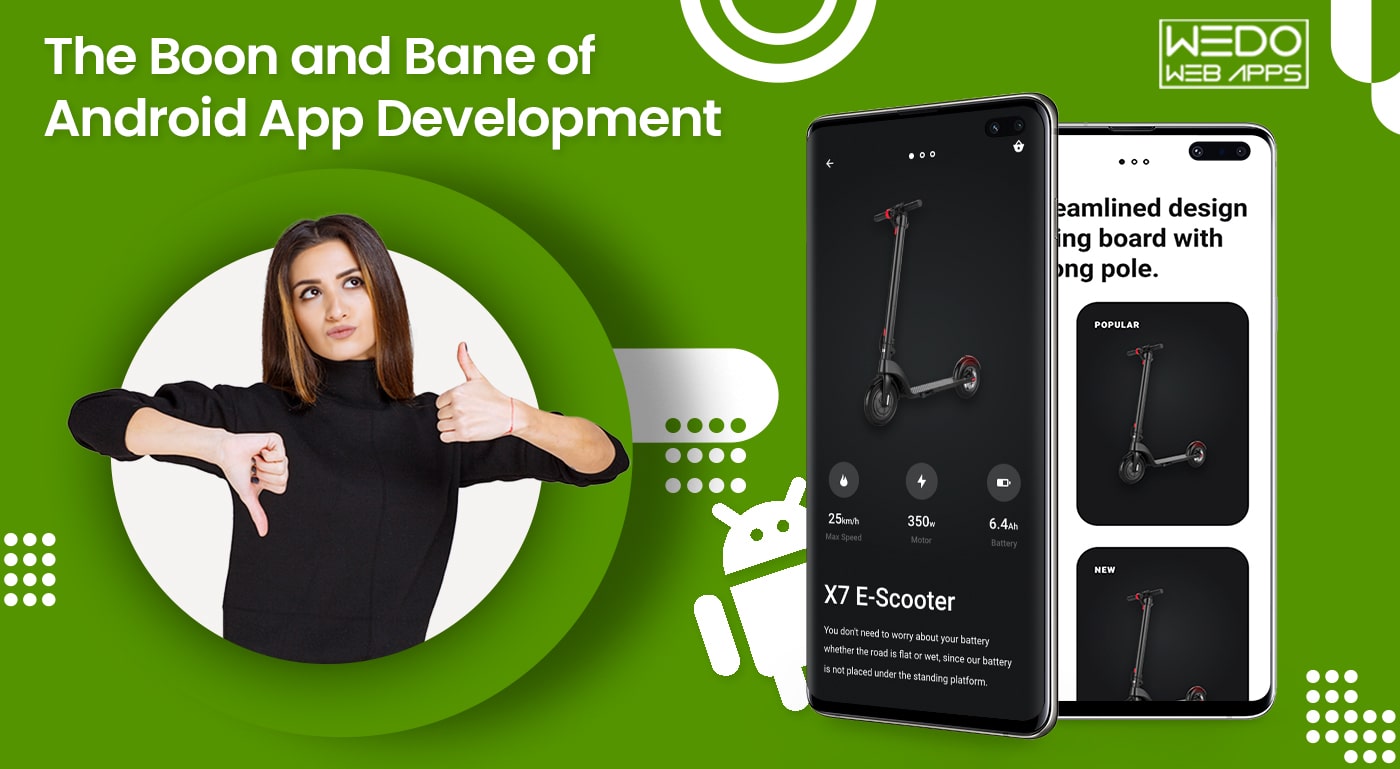 The Boon and Bane of Android App Development

Most likely, it won’t be surprising to say that gadgets are the most essential part of our day-to-day life. It’s even hard to imagine oneself without a smartphone for more than one day. With the help of the devices, you can easily be in touch with your family remotely, solve business issues on a global level, track routes, keep a count of your daily calories, and even do business seamlessly.

Recently due to the pandemic, the demand for gadgets has increased tremendously. The quarantine worldwide has reduced the times of face-to-face communication, thereby forcing the education and health world, and also the other industries, to move online. Now every business prefers earning and solving its issues online, which is good in a way. Isn’t it? Does your company have an application? Or are you looking for a smoothly running application to solve your business issues?

Due to a lack of time or cost, several companies have to choose between iOS or Android App Development. The main reason behind this is the confusion on how perfect the choice can be and whether the application deployed on the particular platform can make their business achieve their desired goals.

You need not forget that one among both the platforms has a market share of approximately 90%, and the devices based on that platform are launched around the world. Yes, we are talking about Android. The android operating system is compatible with any device and can provide businesses with magnificent scalability.

In this article, we will discuss the pros and cons of Android App Development and how it is beneficial to avail of the android application development services.

Besides knowing the boons and banes of android app development, it is also worth knowing the history of Android.

How was Android Found?

The history of Android began someday in October 2003. Before that, the term smartphone was widely used as Apple announced its very first iPhone. To look at the history of Android, it was founded in Palo Alto, California. Four developers, namely Rich Miner, Nick Sears, Chris White, and Andy Rubin in 2003, and in 2005 it was bought by Google.

According to some surveys, Android monthly has around 200 million active users worldwide, and 2.6 million Android applications are uploaded on Google Play Store. Android is interested in reaching a broader user base. According to the above information, every company should develop an Android Application for strengthening its brand in the market regardless of its size. Several development companies are offering top-notch Android app development services to make your business proliferate.

As Google is the proprietor of Android, Google applications run seamlessly on Android Systems. Therefore, one of the most significant advantages of choosing Android is its very close integration with Google. And we know how popular is Google these days and has a lot of user base that is ultimately an advantage for Android.

Smooth Compatibility with the Devices

Android applications can undoubtedly run on the gadgets of various manufacturers. This implies the Android application will run consistently on each device regardless of it is worked with an extraordinary user experience. This, in no way, is an easy accomplishment and is accomplished by broad detailing while at the same time building and upgrading the Android operating system.

Android development lets you customize how an application will appear and perform on various devices with the help of its ROMs. The Android app developers use ROMs to build user-specific features and customized interfaces as per the needs of that specific application.

When the comparison is made between iOS and Android app development, it is easier to launch your application on the Android Platform. This is because Android-based apps do not have a stringent or complicated approval process as of iOS. Android applications do not need to undergo any strict initiation process before getting launched on Google Play Store.

Google, Samsung and others are constantly putting effort on improving Android to make it easier for high-quality Android applications to be distributed geographically. They are user-friendly, easily adaptable to media streaming devices, wearable gadgets, Android-based smart TV, and suit various technologies like IoT and AR, VR. Thanks to its omnipresence, the Android market share constitutes 70-80% of the market.

Android App Development is done using Java language and makes it possible to target the apps on various platforms like Ubuntu and Symbian. This is one of the most significant reasons one should go for android application development services. It also ensures the wise allocation of resources.

For one thing, it is good that Android app development is open-source, and the developers can customize the apps according to the tasks and specifications. But on the other hand, the open-source nature of the code makes it unprotected from all sorts of security threats. Therefore, with android application development, the developers’ responsibility is to provide the app with a sufficient level of security through encryption.

The Google Play store has a vast number of applications launched on it yearly and gives users so many options to choose from. But, at the same time, some applications are free, and some are paid, and users always choose free over the paid ones. The meaning behind this is, you have to come up with a unique marketing strategy to make your app visible to get ahead of the competition.

Usually, to make your application more functional, developers think of integrating third-party APIs into your app. However, all the APIs are not compatible with every operating system; this causes compatibility issues.

After clearly looking at the strengths and weaknesses of Android App Development, it is evident that Android is an operating system that has a huge customer base and can help you in business growth. However, to choose the operating system for development, you first need to fix your budget and look at various other factors like the business idea, time to market, target audience, etc.