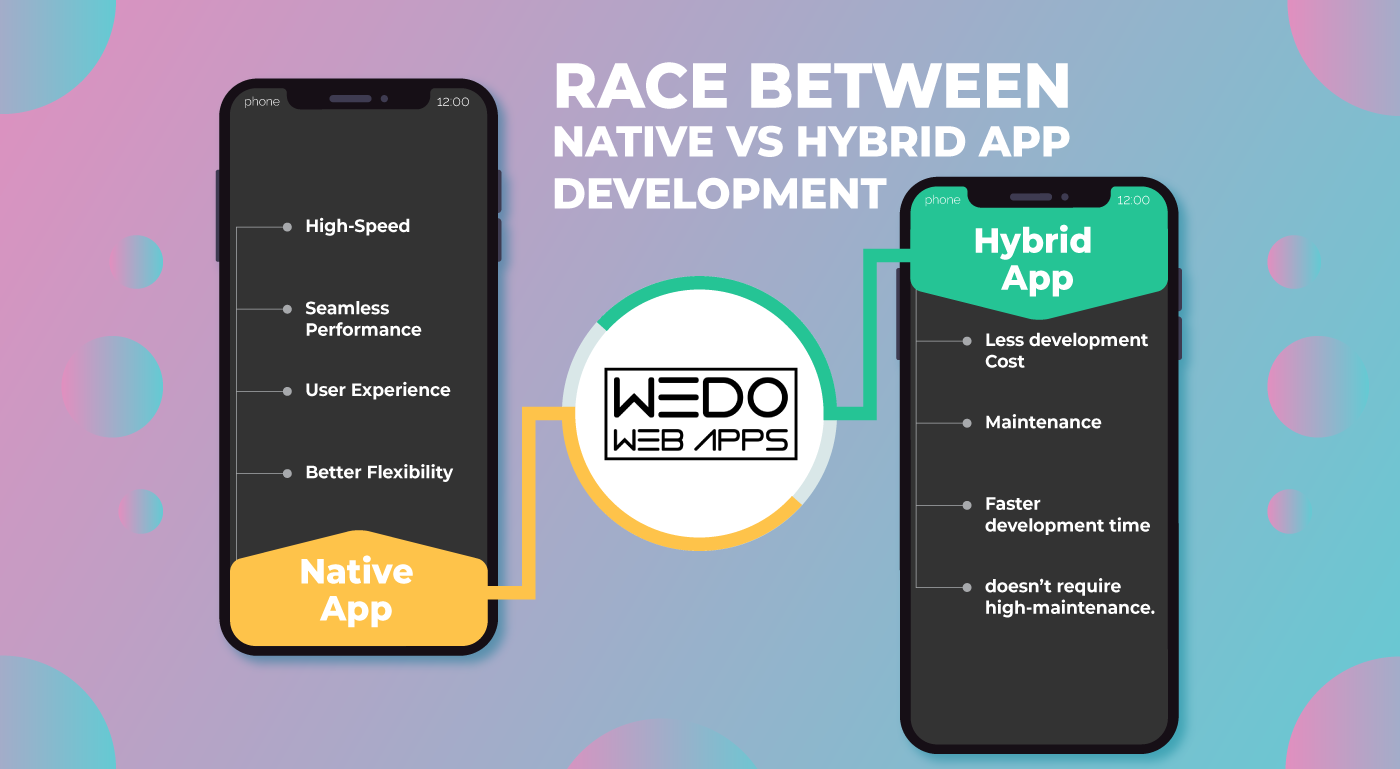 With every passing moment, the worth and usefulness of the smartphone are increasing at a rapid speed. And this need for smartphones has also elevated the app development market.

Today, every business prefers to hold a security check on the digital presence for their brand, and nothing suits better this demand, then a mobile app technology.

However, app development has reached another level of convenience with the introduction of different platforms.

In this run, the most debatable topic is the Hybrid App vs Native App that creates a different aura around the app development field. For a non-technical person, this debate leads to a jigsaw puzzle that needs to be solved further.

Are you confused too?

To help you find out the most suitable answer to pick the best out of bot, we have brought this topic here. So just read this post further to compare both native vs hybrid app development and decide which platform is best for your app development needs.

Let’s take a tour of hybrid app vs native app pros and cons, further with this post…

A native mobile app is a process wherein the apps are created separately for iOS, Windows, Android, and Blackberry. The apps built on the native platform, are supposed to run only on one specific operating system.

Although the development process of this platform requires the developer to create different versions of an app for various systems.

With the help of native apps, developers can provide optimized performance and take advantage of the latest technology.

In the Native App, developers have to write code in Swift or Objective-C for iOS applications, Java for Android Native applications and C# for Windows.

The development of native apps can be done with mobile device features, such as a microphone, camera, location detection, etc. Also, with the help of native apps, it becomes much easier for the users to experience the seamless user experience when compared to hybrid apps.

On the other hand, the pricing for the native app development is little on the higher side, as it involves the specific expertise of the developers.

The essential requirement of the native app, suggests the developers need to write different codes for different operating systems. Due to this fact, the app is made only for a specific operating system and gives a smooth performance.

A native application is optimized as per the requirements of a particular platform. This ensures to provide higher speed and performance. Also, during the development, developers take care of every aspect, and this helps in increasing the speed.

Native apps are known for offering a smooth and engaging user experience. This helps your users to be more connected with the app interface.

With the native apps, you can access inbuilt devices such as GPS, camera, calendar, and other mobile device functionalities.

For a Native app, developers are supposed to hold expertise in a specific platform. This leads to increased app development costs.

Since Native apps work according to a particular operating system, hence they take more time to get developed.

As the name suggests, Hybrid apps, are that app, which is created for different platforms. With the help of one single Hybrid app, it can run smoothly on iOS, Android, Windows or Blackberry.

In other words, hybrid apps are the fusion of native and web apps. These apps are created to work on different operating systems without fail. On using you may find these apps to look and feel like a native application, but are run by a website.

The hybrid apps are built on different languages, including CSS, HTML5, and JavaScript. On the other hand, it is a web-based app that is covered in the native app and is further connected to the device’s hardware.

Hybrid apps are often being picked, due to their cost-effective nature, which fits into the tight budget as well.

On average, the cost of developing hybrid apps is less compared to any other platform.

Are you running on a tight budget? And want to have an app that works faster but within the budget? Then proceeding ahead with hybrid is the best choice.

On the hybrid apps, you can update the content as many times, and it doesn’t require high-maintenance.

Yes, you heard it all correct, hybrid apps don’t consume much time in development and helps you launch your app much faster in the market.

Within the platform of the Hybrid app, there is an addition of an extra layer between source code and the mobile target platform. This brings poor app performance.

The extra layer in the hybrid app leads to debugging issues as well. To make it work, developers need to rely on the framework to make it work on the targeted OS.

Yes, the UX of a hybrid app is not that efficient.

No doubt, both the apps hold their share of pros and cons. However, something that cannot be missed here is that each of these platforms has an incredible set of features and functionalities. These are sufficient to create an app that can turn the heads of your audience.

On the other hand, hybrid apps development are useful for budget app requirements, and if smooth UI/UX is your prime motto, then Native is the best choice.

The choice is yours, so pick the right platform that fits your business needs. Woocommerce VS Magento- Choose the right platform for your e-store!
React Native Vs Ionic- Which is a better framework for your app development?